AFP: Of 31 terrorists killed in Marawi ops, 6 are foreigners 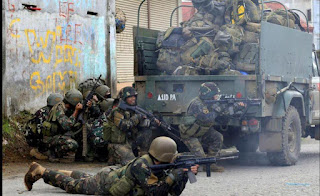 MANILA, May 26 —- Of the 31 Maute Group members killed by the military in the ongoing clearing operations in Marawi City, Lanao Del Sur, at least six are foreigners.

“We received certain information that among the 31 killed, of the 12 identified, at least six of them are foreigners, but we are still validating this information,” Armed Forces of the Philippines (AFP) spokesperson Brig. Gen. Restituto Padilla on Friday.
Possible nationalities of the six slain terrorists are Malaysians and Indonesians.
Aside from fighting government forces, these terrorist elements are also helping lawless groups in the country in the manufacture of improvised explosive devices and bombs.
The clash between Maute Group members started 2 p.m. Tuesday in Barangay Basak, Malutlut when government security forces learned of the presence of Abu Sayyaf Isnilon Hapilon, who was allied with the lawless element, and his cohorts.
Hapilon was reported severely wounded in the series of military operations in Lanao Del Sur early this January.
The former is reportedly the representative of the ISIS terror group in the Philippines.
(PNA)
0 52
Share FacebookTwitterGoogle+ReddItPinterestLinkedinTumblrTelegram