‘I Believe It Can Be Done’- Manny Piñol 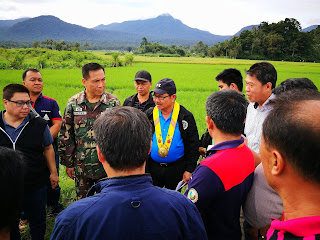 Butig, Lanao del Sur, known as the Cradle of Maranaw Civilization and now the de facto capital of the Islamic Caliphate in the Southern Phiippines, will be Ground Zero of President Rody Duterte’s campaign against poverty in the province.
The task is daunting and the challenges tough.
Lanao del Sur is the country’s poorest province with an outrageous poverty incidence of 74.3% in the 2015 data of the Philippine Statistics Authority.
(The national average poverty incidence is 26%.)
The potentials, however, are overwhelming.
In the heart of the province is the 35,468-hectare Lake Lanao which is the source of water for the series of hydropower generation facilities supplying more than half of Mindanao’s energy requirements.
There are several waterfalls and rivers in the province and the land is very fertile.
The climate is cool and developing a dairy cattle industry in the province is an exciting prospect.
On Thursday when I visited Butig along with Undersecretary Eduardo Gongona of the Bureau of Fisheries and Aquatic Resources (BFAR), American fisheries expert Rocky French and other officials of the Dept. of Agriculture, it was agreed that the town would be the Ground Zero of the effort to lift Lanao del Sur and its people out of poverty.
I have always believed that the first step in lifting people out of poverty is to ensure that they have access to food.
On the recommendation of Rocky French, who used to work with the US Fisheries, Game and Wildlife Deparment, the BFAR was tasked to seed the small lakes of Butig and the whole Lake Lanao with millions of Bangus and Tilapia fingerlings.
“If you do that, you will give people access to fish supply and all that you need to do is give them the fiberglass fishing boats and nets,” French said.
The second program is white corn and rice production which was identified by the residents of Butig as their preferred farming activity.
To implement this, the Dept. of Agriculture will deliver to Butig within one month 1,785 bags of OPV White Corn Seeds and 3,000 bags of hybrid rice seeds, along with the farm inputs needed.
Added to that, two 100 horsepower tractors to plow the corn fields, four 45hp tractors and five power tillers for the rice farms, a rice harvester, two corn harvesters, a grains dryer and a rice processing facility will be delivered as well.
The Dept. of Agriculture will help the farmers of Butig sell their produce to institutional buyers.
The rice produced by Butig farmers, for example, will be sold in bags of 25 to 50 kilos properly marked and identified as products of a people searching for peace or Pagkain Para sa Kapayapaan.
When the DA has assured the people of Butig with enough sources of income for their daily subsistence, it will introduce high value crops such as the planting of fruit trees.
From Butig, the DA Pagkain Para sa Kapayapaan (PPK) program will be introduced to the other towns of Lanao del Sur.
This early, I am setting a target of reducing Lanao del Sur’s poverty incidence from 74.3% to only 35% by the end of the term of President Duterte.
I believe it can be done.
If there’s a will, there will always be a way!
Source: https://www.facebook.com/MannyPiñol-351448724937603/
0 66
Share FacebookTwitterGoogle+ReddItPinterestLinkedinTumblrTelegram