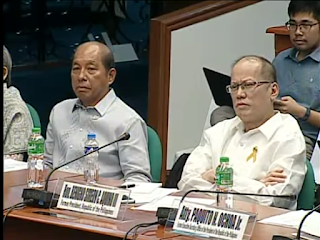 MANILA – The Department of Justice (DOJ) has issued an Immigration Lookout Bulletin Order (ILBO) against former President Benigno “Noynoy” Aquino III, some of his Cabinet members, and key Sanofi Pasteur executives in connection with the controversial P3.5 billion dengue immunization program of the Department of Health (DOH).
In a memorandum released Saturday, Justice Secretary Vitaliano Aguirre II directed Immigration Commissioner Jaime Morente to instruct all immigration officers in the country’s airports and seaports to be on the lookout to prevent attempts of Aquino and others to leave the country.
Placed under the ILBO were former Budget Secretary Florencio Abad, former Executive Secretary Paquito Ochoa, former Health Secretary Janette Garin, Guillaume Leroy, Olivier Brandicourt, Ruby Dizon, Thomas Triomphe and Carlito Realuyo. 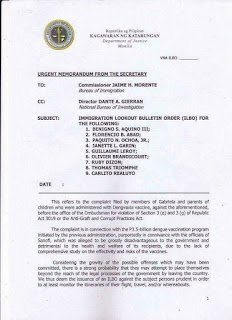 Aguirre said that considering the gravity of the charges, there is a “strong probability” that the persons may leave the country.
“We thus deem the issuance of an ILBO against the subject persons prudent in order to at least monitor the itineraries of their flight, travel, and/or whereabouts,” said Aguirre.
A person subject to an ILBO can still leave the country subject to conditions and requirements, including clearance from the Justice department.
An ILBO is different from a court-issued hold departure order (HDO), since the former only directs the BI to be on the lookout for the subject and to verify the status of a case against the subject person and not to restrict an individual from leaving the country.
Earlier, Aguirre ordered National Bureau of Investigation (NBI) Director Dante Gierran to “conduct investigation and case build-up over the alleged danger to public health arising from the PHP3.5 billion anti-dengue vaccination drive of the DOH and Sanofi Pasteur and if evidence so warrants, to file appropriate charges thereon.”
Aguirre required the NBI to submit a status report on their investigation regarding the issue, but did not give the NBI a timeframe on their probe.
He said the probe would look into whether government officials should be held liable for the seemingly rushed procurement of the vaccine and the immunization of more than 700,000 children.
Aguirre admitted that among those who would be investigated for possible culpabilities is former President Aquino, who gave the go-signal for the DOH to proceed with the vaccination project in 2016.
Also poised to be investigated is former Health Secretary Janette Garin, who insisted on implementing the project despite strong objections from medical experts due to lack of certification from the World Health Organization (WHO).
Pharmaceutical giant Sanofi Pasteur recently issued an advisory to the public that its product Dengvaxia is effective for people who have had dengue prior to immunization but creates a risk of a “severe” case of dengue for people who have not had dengue. (PNA)
0 85
Share FacebookTwitterGoogle+ReddItPinterestLinkedinTumblrTelegram