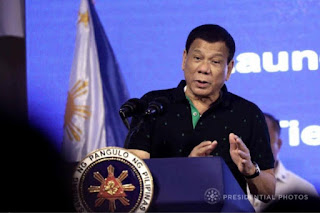 MANILA — President Rodrigo Duterte has asked Congress to further extend the declaration of martial law in the whole of Mindanao for another year, or for the entirety of 2018, in order to totally eradicate terror threats posed by remnants of Islamic State (IS)-linked terrorists and by communist rebels in the region.

In his letter to Congress dated December 8, Duterte said extending the martial law for another year will help state security forces to crush the rebellion in Mindanao and ensure public safety.
“A further extension of the implementation of Martial Law and suspension of the writ of habeas corpus in Mindanao will help the AFP (Armed Forces of the Philippines), the Philippine National Police (PNP), and all other law enforcement agencies to quell completely and put an end to the ongoing rebellion in Mindanao and prevent the same from escalating to other parts of the country,” Duterte said in his letter.

“Public safety indubitably requires such further extension, not only for the sake of security and public order, but more importantly to enable the government and the people of Mindanao to pursue the bigger task of rehabilitation and the promotion of a stable socio-economic growth and development,” he added.

In his letter, Duterte highlighted the different terror threats facing Mindanao, which were part of the security assessment submitted to Malacañang by the AFP and the PNP.

The President noted that despite the deaths of almost a thousand IS-inspired extremists, including their leaders, in the battle of Marawi, remnants of the group and their supporters have continued their recruitment and training of new members “to carry on the rebellion.”

“You will please note that at least 185 persons listed in the martial law arrest orders have remained at large and, in all probability, are presently regrouping and consolidating their forces,” he said.
He specifically pointed to the remnants of the IS-inspired Da’awatul Islamiyah Waliyatul Masriq (DIWM) as being active in recruiting and consolidating their forces in Central Mindanao.

“These activities are geared towards the conduct of intensified atrocities and armed public uprisings in support of their objective of establishing the foundation of a global Islamic caliphate and of a Wilayat not only in the Philippines but also in the whole of Southeast Asia,” Duterte said.
The President also cited the terror threat from the Turaifie Group, which has been monitored to be planning to conduct bombings in the Cotabato area.

According to reports, the ASG was behind 43 acts of terrorism this year, which included bombings, kidnappings and beheadings.

Lastly, Duterte accused the NPA of taking advantage of the Marawi siege to intensify their decades-long rebellion against the government and “stepped up terrorist acts against innocent civilians and private entities, as well as guerilla warfare against the security sector and public and government infrastructure.”

He said the NPA’s objective was to “purposely seize political power through violent means and supplant the country’s democratic form of government with Communist rule.”
The President said the NPA has perpetrated at least 385 atrocities in Mindanao since the year started that resulted in the deaths of 41 state forces and the wounding of 62 others.
He said these atrocities also resulted in the deaths of 23 civilians, including a four-month old infant, and the wounding of six others.

In the meantime, at least 59 arson incidents against private business and establishment have been carried out by the NPA in Mindanao this year that resulted in the destruction of an estimated PHP2.2 billion worth of properties.

The President said that he was constrained to terminate peace talks with the National Democratic front-Communist Party of the Philippines-New People’s Army (NDF-CPP-NPA), and later on to tag the CPP-NPA as a terrorist organization, as a direct result of the atrocities on the part of the NPA.
“These recent developments involving the NDF-CPP-NPA forebode another year of intensified armed hostilities which, together with other security concerns and described above, continue to make Mindanao the hotbed of rebellion,” he said.

“For all these reasons, I ask the Congress of the Philippines to further extend the proclamation of Martial Law and the suspension of the writ of habeas corpus in the whole of Mindanao for a period of one year, from 01 January 2018 to 31 December 2018, or for such period of time as the Congress may determine, in accordance with Section 18, Article VII of the 1987 Philippine Constitution,” Duterte said in his letter.

President Duterte first declared martial law in Mindanao on May 23, 2017 when fighting broke out between government forces and IS-linked terrorists erupted in Marawi City.
In July, Congress extended the declaration until December 31, upon Duterte’s request. (PNA)