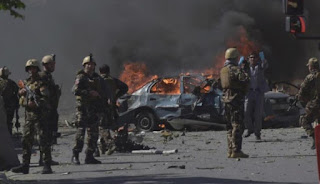 MANILA –  As the Philippine government expressed its condolences to Afghanistan amid the latest terrorist bomb attack in Kabul, the Department of Foreign Affairs (DFA) said no Filipino was among the more than 40 persons killed and at least 80 others injured in the attack.
In its report to the home office, the Philippine Embassy in Islamabad, which has jurisdiction over Afghanistan, said none of the 1,500 Filipinos estimated to be working in Kabul and other parts of the country were among the casualties in the attack.
Chargé d’Affaires Anwar Ito said the attack targeted a Shi’a cultural center and a news agency in the western part of the capital. The incident came three days after an attack at an intelligence compound also in Kabul left 10 persons dead.
Meanwhile, Ito said Filipinos in Afghanistan were reminded to remain vigilant and take the necessary precautions to ensure their safety and security.
“The Philippines joins the government and the people of Afghanistan in mourning the loss of many lives in the terrorist attack in Kabul on Thursday,” Foreign Affairs Secretary Alan Peter Cayetano said in a statement.
“We condemn this senseless act of violence that deliberately targeted innocent civilians, many of them young students and even some women and children.” (PNA)

No Filipino casualty in missile attack in Saudi Arabia