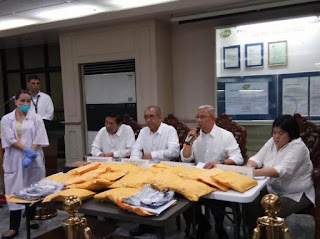 On December 4, around 10:30 a.m., the same operating unit intercepted another parcel consigned to Erquiza which contained more or less 5.5 kilos of suspected shabu worth PHP27.5 million. The parcel was passed off as children’s toys and puzzles.

“The package was declared as toys (wooden blocks-Christmas edition) and its intended receiver was Almodiel,” Aquino said.
Aquino said that when the parcels were delivered to the consignees’ addresses, both failed to show up.

Almodiel and Erquiza will be charged for violation of Section 4 (Importation of Dangerous Drugs), Article II of Republic Act 9165, or The Comprehensive Dangerous Drugs Act of 2002. The identities and information of the sender and consignees indicated in the parcels are presently the subject of investigation and validation.