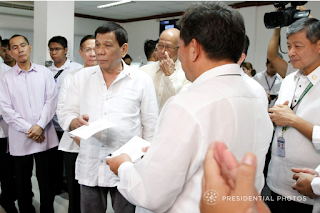 President Rodrigo Roa Duterte on Wednesday, November 20, turned over P100 million to the Veterans Memorial Medical Center (VMMC) for the improvement of its services.
During his visit to the hospital, the Chief Executive promised to augment the donation before the end of the year.
He said the additional funds would come from the Philippine Amusement and Gaming Corporation (PAGCOR).
The President then instructed officials of the VMMC to look for the best medical equipment in the market.
“Buy the best, huwag yung lowest bid… I want quality. Quality ako,” he told the hospital’s officials and staff.
Duterte told them to do away with the practice of awarding contracts to the lowest bidder, noting that this is a major source of corruption.
Meanwhile, 19 patients undergoing hemodialysis received groceries from the Chief Executive.
The President was accompanied by Defense Secretary Delfin Lorenzana, Health Secretary Francisco Duque III, and Special Assistant to the President Christopher Lawrence “Bong” Go.
VMMC is tasked to provide medical care and treatment to veterans and their dependents. ### (PND)
0 59
Share FacebookTwitterGoogle+ReddItPinterestLinkedinTumblrTelegram