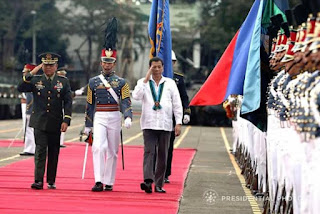 President Rodrigo Roa Duterte on Wednesday, December 20, declared that the government would never allow the Philippines to be the regional center of the terrorist Islamic State.
The Commander-in-Chief made this proclamation as he graced the 82nd anniversary celebration of the Armed Forces of the Philippines (AFP) at Camp Aguinaldo in Quezon City.
He congratulated AFP for its more than eight decades of honor, service and patriotism and cited its crucial role in safeguarding the citizenry and securing the land.
“I salute the brave men and women of our Army, Air Force and Navy for their courage, dedication and sacrifice to liberate Marawi from the clutches of extremist terrorists and communist insurgents,” President Duterte said in his speech.
The Chief Executive noted that the liberation of Marawi as well as the neutralization of Isnilon Hapilon further bolsters his administration’s firm thrust towards eliminating all terrorist groups in the country.
“We will not allow those who subscribe to the Daesh ideology to succeed. We will never allow the Islamic State to make the Philippines its regional center,” he said.
Duterte said the government would remain vigilant as it continues intensified military operations against the remaining terrorist groups.
“Although we have already begun to rebuild Marawi City and rehabilitate conflict-affected areas, our fight is far from over,” the President said.
Duterte also recognized the supreme sacrifice of the troops who suffered injuries and went beyond the call of duty, adding that the government would support all of their endeavors.
He told them not to worry about their families, assuring them that the government would always be there to see to it that their children would continue to go to school until college time.
For the AFP Medical Center in V. Luna, Quezon City, he said the government would provide P50 million as monthly subsidy.
“I will subsidize ‘yung medicines, especially those who are — Well, they need the management for bills,” he said.
The President concluded his speech by expressing confidence that the government would embrace the changes that are necessary for the continued development and would work even harder to fulfill the duty and responsibility to protect the Filipino people.
During the event, the President posthumously awarded Capt. Rommel Sandoval of the 11th Scout Ranger Company a Medal of Valor and Order of Lapu-Lapu (Magalong Medal) for his display of courage and gallantry during the Marawi siege. His wife, Ma. Ana, received the awards.
He also conferred the Order of Lapu Lapu to 26 other soldiers for their role in various military operations against the Maute terrorist group and the New People’s Army (NPA).  ### (PND) 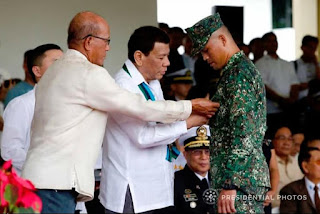 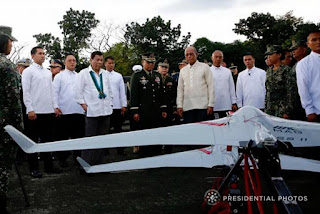