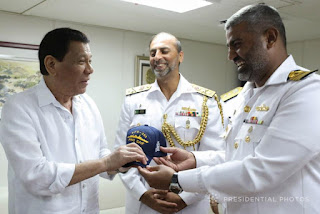 President Rodrigo Roa Duterte toured a Pakistan navy ship docked at the Manila South Harbor on Thursday, December 14, as part of its three-day goodwill visit to the Philippines.

President Duterte was welcomed by officials of the Embassy of the Islamic Republic of Pakistan to the Philippines and the Pakistan Navy for an exclusive tour of the Pakistan Navy Ship (PNS) SAIF (FFG-253), one of the four F-22P or Zulfiguar-class frigates of Pakistan.
Duterte warmly greeted the crews aboard the navy ship telling them that they could drop by the country “any time for any reason.”

The Chief Executive was accompanied by some of his Cabinet officials led by Defense Secretary Delfin Lorenzana during the tour that lasted almost an hour.
The navy ship, with onboard ASW (Anti-Submarine Warfare) helicopter Z9EC, will stay in the country until December 17. 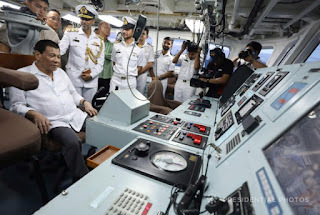 Its three-day visit will include series of confidence-building engagements between the Philippine Navy (PN) and the Pakistan Navy personnel.
Other activities include shipboard tours, visit to national heritage and historical places in Manila, goodwill games, receptions, hosted dinner, and a gift giving at Buhay Tuluyan in Leveriza, Manila. The visit will be capped off with a send-off ceremony.

Prior to their visit here in the country, the PNS SAIF had already been to China and Thailand. Their next stop is Malaysia.
The goodwill visit aims to renew and strengthen the relationship between the Philippines and Pakistan. It also promotes friendship, cooperation and mutual understanding between the two navies through naval diplomacy.