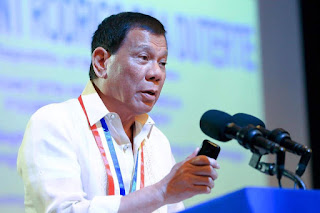 DAVAO CITY — President Rodrigo Duterte on Friday, July 14, called on his fellow government officials to shun graft and corruption, as well as the use of sirens.
President Duterte graced the 11th Ambassadors’ Tour Philippine Reception at the SMX Convention Center here in Davao.
In his speech, President Duterte asked his fellow government officials not to use sirens and not to have “many bodyguards,” adding that he also told his Cabinet officials not to use the number 6 car plate.
“And I told them — walang maggamit ng siren at I do not like ‘yung you would strut around with many bodyguards,” President Duterte said.
“Huwag kayong mag-siren, we are not a special breed. We are just workers of government, we are paid to work. We are not paid to strut around,” he said.
Duterte said he is just a simple government official like his father, who was a former governor of Davao during the time of then President Ferdinand Marcos.
The President noted that he used to ride his motorcycle without any bodyguard when he was mayor of Davao City.
He also said he will limit body guards assigned to government officials to just one or two.
“Tatay ko governor for ten years dito when this is only one Davao, we are not even allowed to ride on his car maski naka-parking,” Duterte said.
President Duterte meanwhile recognized the assistance of China and the United States in the government’s fight against the Maute terrorist group in Marawi City.
“The United States helped the Armed Forces in this fight, and China committed and delivered a lot of firearms for us — ‘yung mga sniper,” he said.
However, he clarified that the Philippines cannot enter into military alliances with other nations because he would be “violating” the US-Philippines pact.
Meanwhile, President Duterte thanked the participants of the 11th Ambassadors’ Tour for taking time to visit Davao City.
“I thank you for your contribution to the advancement of Filipino-American communities,” he said.
“This serves as a special homecoming program for you so that you can share with your colleagues your success as our country’s most respectable representative in the United States,” President Duterte added.
He said that as Filipinos based in the US, they can contribute to the country by promoting the Philippines as an “ideal location for business to thrive, and as a great destination for tourists to experience.
0 51
Share FacebookTwitterGoogle+ReddItPinterestLinkedinTumblrTelegram

PCOO EXPENSES AND DISBURSEMENTS ARE REGULAR, ACTUAL AND NECESSARY; RECORDS TO BE RECONCILED WITH COA