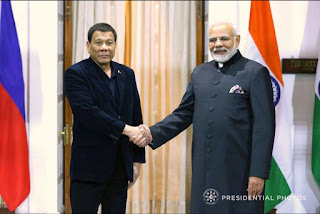 At a press briefing here, India Ministry of External Affairs Secretary Preeti Saran described the bilateral meeting between President Duterte and Prime Minister Modi as “very cordial.”
Saran said the Prime Minister conveyed his deep gratitude to the President for pushing through with his trip despite having domestic problems back home particularly the Mayon volcano eruption. 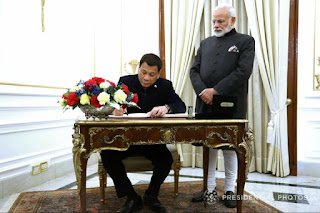 “Our Prime Minister conveyed his deep appreciation to President Duterte. He was aware of the risk of Mayon Volcano that has erupted which is naturally a cause of concern,” said Saran.

“And in fact because of that, President Duterte had to delay his flight because he needs to attend to issues related to assuring safety and whichever arrangements that they need back home,” she added.

She said Prime Minister Modi appreciated the fact that President Duterte still brought along a high-level delegation including his Cabinet officials in his trip “underlining the importance that he personally attached to this visit.”

“That gesture was deeply appreciated by our Prime Minister and he conveyed his sincerest thanks to him for that,” she added.

Saran said the two leaders discussed a wide range of issues of mutual interest during the bilateral meeting including combating illicit drug trafficking, sharing of intelligence and countering terrorism such as urban terrorism.

She added that that the two “shared concerns about the proliferation of weapons of mass destruction” citing linkages and international networks involved in such activities.

The Indian official said President Duterte also reiterated his deepest appreciation to Prime Minister for the assistance of $500,000 that was provided by India to resettlement of victims of Marawi siege.

She said Duterte likewise expressed interest and desire for greater cooperation with India in the pharmaceutical sector and agreed to form a joint technical working group to hold meetings as early as March.

She said the President also conveyed his appreciation for the role of the Indian community in various fields in the Philippines including economic, services sector and infrastructure.
Duterte is in India along with nine other heads of states of the Association of Southeast Asian Nations (ASEAN) for the special commemorative summit marking 25 years of India’s ties with the Southeast Asian bloc.

The Chief Executive will also be one of the chief guests during the grand Republic Day parade and celebrations of India on Friday.

The President attended a retreat and plenary sessions together with the ASEAN heads of states and Prime Minister Modi on Thursday.

“Your current presence here has touched the hearts of my 1.25 billion fellow Indians,” Modi told the 10 ASEAN heads of states.

“I’m delighted to welcome you all to the ASEAN-India Commemorative Summit. Though we are celebrating 25 years of our partnership, our shared voyage go back thousands of years. It is a privilege for India to host all the ASEAN leaders for the second time in five years,” he added. 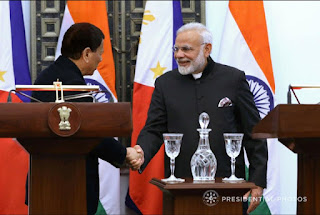 Aside from the meetings, President Duterte also joined his fellow ASEAN leaders during a luncheon hosted by Indian President Ram Nath Kovind and First Lady Savita Kovind at the Rashtrapati Bhavan.

He also participated in an event where Prime Minister Modi released a set of 11 ASEAN-India Commemorative stamps, one for each country, celebrating their common heritage.
The President ended his day by attending the cultural programme and banquet hosted by Prime Minister Modi for the visiting heads of states. PNA

No Filipino casualty in missile attack in Saudi Arabia