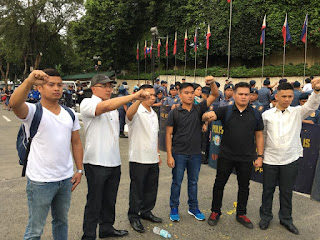 MANILA, June 6 — A youth group on Tuesday claimed that there were irregularities in the 2016 elections, believing that President Rodrigo Duterte should have gotten majority of the votes.

With this, Duterte Youth Chairman Ronald Cardema has requested the Commission on Elections (Comelec) to let them present before the poll body “the violations committed by Smartmatic in the conduct of the past elections” next week.
“We, the members of the Duterte Youth, would like to respectfully request to have an audience with the Commission En Banc on June 13, 2017, Tuesday at 10 o’clock in the morning,” said the letter addressed to Comelec Chairman Juan Andres Bautista, which personally delivered at the latter’s office in Intramuros, Manila.
On the other hand, Cardema noted that they got the information of the alleged irregularities from the Philippine Computer Society (PCS).
“We believe that based on the facts that the Philippine Computer Society have shown us there was something wrong with the results. This means (former) Mayor Duterte should have gotten majority of the votes,” he said in an interview.
Likewise, the group is looking to present to the poll body officials their stand why the service provider in the last three elections should not allowed to be part of the conduct of polls in the country again.
“To have a brief dialogue with you and the Honorable Members of the Commission and present our position why Smartmatic should be disqualified to join the bidding and be prohibited from being your service provider in any future automated elections in the Philippine Republic,” the letter added.
The organization, which has 9,000 members all over the country, said they would want the next elections in the country to be better and more accurate.
“We only voice out our election concerns our election problems during election day and election month. So now we have two years before the 2019 elections, and the 2019 elections is the first elections under the Duterte administration. And we in Duterte Youth we want a clean, a better and a more accurate flawless elections this coming 2019,” he said.
“And we believe that in the 2016 elections, Mayor Duterte got more than 16 million votes and if Comelec will allow us to do a presentation next week together with the Phil. Computer Society, we will present our facts so that they can review Smartmatic because kung nakita natin na madami nang violations ang Smartmatic, maybe accidentally or deliberately from the 2010, 2013 and 2016 elections, we should not allow them to continue to be our service provider by 2019 elections,” added Cardema, who was confronted by singer Jim Paredes during EDSA anniversary celebration.

AFP: Of 31 terrorists killed in Marawi ops, 6 are foreigners

Marawi attack could be part of oust plot vs President Duterte – Sec. Aguirre